The universe, and everything it encompasses, has kindled the curious human mind for ages, leading to numerous “eureka” moments in understanding the intricacies of “outer space.” Several manned and unmanned space explorations have been successfully deployed to date, using chemical energy and solar energy as the primary sources of energy. However, these sources may not be very energy-efficient or meet the growing demands of our future endeavors.

Nuclear or fission energy has revolutionized the supply of energy worldwide in the past few decades and will likely transform outer space explorations. Radioactive power, a commonly applied energy source in space missions, has production and cost limits, with the power range falling within 1 kW.

On the contrary, fission power easily scales up to 100 kW or more! In an attempt to seek middle ground, the National Aeronautics and Space Administration has conceptualized a 1-10 kWe space reactor that relies on the Kilowatt Reactor Using Stirling TechnologY (KRUSTY).

In a review published in Space: Science and Technology, researchers from Beijing, China, have summarized the design, implementation, and potential applications of fission space reactors in deep space explorations worldwide.

With an interesting analogy on how nuclear energy can scale up our space missions significantly, Dr. Qin Zhou, the corresponding author of the article, explains, “Considering our present energy consumption in even flagship level space missions is less than that of an air conditioner, a fission reactor with state-of-the-art technology applied to the power source will enable electricity consumption comparable to that of a whole household, while further development will enable an even higher energy consumption in the future!”

KRUSTY is the first and the only space power design developed in this century that has undergone a complete ground test and inspires rethinking of nuclear-powered spacecrafts worldwide. Its durability, robustness, and compactness make it a valuable resource that can optimize deep space missions of longer durations and distances. The high-power supply also enables the use of additional scientific instruments required for meaningful planetary explorations.

With the use of fission power, we can now aim to accomplish missions long aspired for, including explorations of distant planets: Jupiter and its moons; Saturn and its moons; Chiron, a primitive planet-crossing asteroid; and the Kuiper Belt ring region beyond the orbit of Neptune, among several others.

Apart from such exploratory missions, human lunar and Mars surface missions as well as unmanned ventures can also be undertaken. Beyond its applications in space exploration, fission power can also enhance military and civil operations with high energy demands. On a non-academic note, deep space tourism may soon become a reality, with fission powered spacecrafts.

Overall, fission power has the potential to scale up space missions and extend their applications to explore distant regions of our solar system, which are otherwise difficult to access with conventional technologies.

Highlighting the future direction of fission-powered space missions, Dr. Zhou remarks, “In the coming five to ten years, we will likely witness a boom in nuclear reactor-based space power systems. We believe that evolution in electric power levels can lead to drastic changes in spacecraft applicability and broaden the scope of deep space explorations.”

Fission power indeed promises to be a game-changer in our long-cherished celestial journeys ahead. 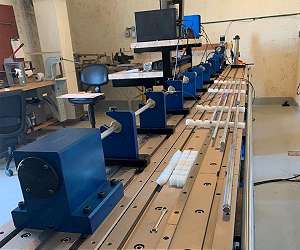 “This system will give AFRL a new and unprecedented capability to test and gather data from any solid propellant we can manufacture,” said Dr. Timothy Miller, senior materials research engineer within AFRL’s Propellant Branch. “This new equipment … read more