LAS VEGAS (KLAS) — Projects that will more than double Nevada’s solar power generation over the next decade are clustered about 200 miles northwest of Las Vegas.

A key part of the renewable energy plan is Greenlink, a $2 billion transmission line project that will connect electric customers to new solar farms in Esmeralda County and elsewhere in the state. Greenlink has been called a “clean energy superhighway” that will help the country meet its ambitious targets of 50% renewable energy by 2030 and 100% by 2050.

But Greenlink is drawing strong criticism from environmentalists, tribal officials and some Nevada towns near the transmission lines.

Transmission lines are scheduled to be built between Las Vegas and Yerington by December 2026 (“Greenlink West”) and between Yerington and Ely by December 2028 (“Greenlink North”). The legislation adopted in 2021 has set the deadline for the completion of the project in 2028.

The non-profit organization Basin & Range Watch accuses NV Energy of planning to build Greenlink on the backs of ratepayers and then sell power to California’s Silicon Valley when transmission lines connect Apex to northern Nevada. The group mocks the utility, calling the project “Gaslink.”

Environmentalists point to negative impacts on wildlife, including pronghorn antelope, desert tortoises, bald eagles and sage grouse. Joshua tree habitat can also be affected, and dust from construction is a concern.

But nonprofits and environmentalists aren’t the only ones speaking out against NV Energy’s tactics. A report in early August on a utilities website — utilitydive.com — says MGM Resorts and Caesars Enterprise Services have challenged NV Energy’s move to seek federal incentives for the project. MGM and Caesars both spun off NV Energy in 2016, with MGM building its own solar farm and Caesars buying its electricity from the Texas company. The move cost MGM $87 million and Caesar $47 million.

Greenlink’s political support appears to be solid. NV Energy and government officials often cite the high-paying jobs as a big advantage. As many as 4,000 jobs will be created. As construction continues, Greenlink will provide an economic boost to towns along the route.

Tribal objections center on potential disturbance near reservations in southern Nevada, near Walker Lake in Mineral County and Tule Springs Fossil Beds National Monument. Some alternative routes have been proposed for transmission lines.

Part of a series of stories exploring solar power in Nevada. 8 News Now looks at various aspects of solar farm growth — including those already operating, plants in development and some that have been canceled. MORE COVERAGE: Copper Rays solar project would be No. 6 in state energy Solar production surge on Nevada horizon Federal legislation to boost renewable energy incentives for Nevada homeowners, including solar

Rajasthan has the highest solar power generation potential among all the states in the country. The state recently surpassed Karnataka as the leading state for solar installations. See the article : What solar energy is best ?. As of August 2022, operating solar projects in Rajasthan generated approximately 14454.70 MW of solar energy.

On the same subject :
Tired of power cuts, blockaded Gaza turns to solar panels
Blockade by Israel since 2007, the Gaza Strip only has electricity for…

Does solar make sense in Nevada?

One of the biggest benefits of going solar is savings. Nevada residents pay an average of $111 per month for electricity, which is a total of $33,000 over 10 years. Once your solar panels are installed, you will notice a reduction in the cost of your electric bills within the first month, and these savings will only increase.

Is getting solar panels from Nevada worth it? At $0.14 per watt less than the national average, solar equipment in Nevada is more affordable than most states, and your money will go further than average. See the article : Does san diego have solar power. Most homes in the area would need a 10-kilowatt system, which would total approximately $17,640 after applying the 30% federal tax credit.

Do solar panels add value to home in Nevada?

The appraisal is often of little value, although it can still be beneficial to a buyer who wants to be energy conscious and able to save enough on their utility bills.

How much does solar add to home value in Nevada?

Homeowners are often surprised to learn how much solar panels increase the value of their home. Zillow estimates that the average U.S. home will increase in value by about 4.1%. That jump in value averages out to about $18,266 in Nevada, where the median home value is $445,515.

How much does solar add to home value in Las Vegas?

Some studies have shown that solar panels increase a home’s resale value by up to $6,000 for every kilowatt of solar panels installed, or about 4.1% of the home’s value.

Are solar panels worth the cost in Las Vegas?

For most homeowners, the upfront investment in solar pays off. On average, Las Vegas homeowners will see a total of about $23,000 in energy bills over 20 years.

Is solar popular in Nevada?

Nevada is one of the leading states, ranking in the top 10 for solar energy production. As a result, it’s easier than ever for Nevada residents to find affordable solar panel systems and save money on energy costs.

Why don’t we put solar panels in the desert?

However, deserts face extreme temperatures that can overheat the panels, as light that is not absorbed creates additional heat. The increase in heat over such a large area can affect the climate, but solar panels are not our only alternative energy source.

Why don’t we put solar panels in space?

Why aren’t we there yet? Although space-based solar power is an innovative concept, we cannot yet send the system completely into space. Launching a space-based solar system is very expensive. In fact, the cost is estimated to be about 100 times too high to compete with current utility costs.

Can solar panels be put in the desert?

Can we really install solar panels in the desert or in areas with very high temperatures? The answer is yes! Take, for example, the Mojave Desert, where solar power towers were first built in 1982. The Mojave Desert receives up to twice as much sunlight as the rest of the world.

Why don’t we put solar panels in desert?

The harsh environment of deserts affects the efficiency of solar panels. Dust and sand accumulating on the solar panels will spoil its functionality. In addition to the temperature being very hot, the changing temperature between day and night causes rapid thermal cycling of all solar panel materials.

On the same subject :
Novel catalyst radically enhances rate of conversion of CO2 into solar fuels
Carbon dioxide or CO2 can potentially be used as a feedstock…

Why doesn’t the US use more solar energy?

Can the US run on 100% renewable energy? USCA states will be able to cover 100 percent of their electricity consumption with renewable energy by 2035, even as demand increases due to the electrification of transportation and heating. The transition to renewable energy sources brings strong health, climate, economic and energy affordability benefits.

Why is solar energy not enough?

Average capacity factors for solar and wind power plants are around 20-25%, primarily because wind and solar power is not available all the time. This means that to produce the same amount of electricity as a fossil power plant, we need 4-5 times more installed capacity than wind or solar power.

What are 3 negatives about solar energy?

Why is solar energy so inefficient?

Some of the photons that hit the solar cell are reflected away from the surface of the cell. Some of the energy from the absorbed photons has been converted into heat during internal recombination instead of generating an electric current. These efficiency losses are unavoidable.

What is the main problem with solar energy?

One of the biggest problems with solar technology is that power is only produced when the sun is shining. This means that delivery may be interrupted at night and overcast days.

The abundance and potential of solar energy across the United States is staggering: PV panels in just 22,000 square miles of the country’s total land area—about the size of Lake Michigan—can provide enough electricity to power the entire United States.

Why isn’t solar power used more in the US?

The existing power grid infrastructure was built to operate at a uniform level of electricity generation, and these grids may not be able to handle the inconsistency of solar energy. The competitiveness of solar energy is also reduced by how often electricity is produced; also known as its power factor.

Could the US run off solar power?

It is possible to cover about 75-80% of the US electricity needs. If the system were designed with excess capacity (the 150% case), the US would be able to meet about 90% of its needs with wind and solar. The authors noted that sometimes these systems produce too much energy to use.

Can the US run on wind and solar? 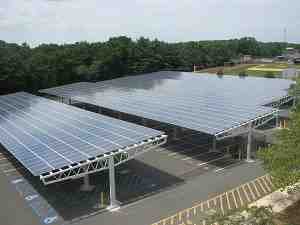 See the article :
Asbury Park schools are turning to solar power for savings and efficiencies, and it’s free
ASBURY PARK – A new solar energy program that could save a…

Which state is the largest producer of solar energy in 2022?

Which Indian state is the largest producer of solar energy? The southwestern state of Karnataka tops the list of solar producing states in India. With a total installed solar capacity of about 7,100 MW.

Where will the most solar energy be used in 2022? Here are the 10 countries with the highest solar capacity:

What is the number 1 solar company in America?