Researchers have developed and demonstrated a new system that can detect defects in silicon solar panels in full and partial sunlight under any weather conditions. Because current defect detection methods cannot be used in daylight conditions, the new system could make it much easier to keep solar panels working optimally.

Silicon solar panels, which make up around 90 percent of the world’s solar panels, often have defects that occur during their manufacturing, handling or installation. These defects can greatly lower the efficiency of the solar panels, so it is important that they be detected quickly and easily.

In the Optica Publishing Group journal Applied Optics, researchers from Nanjing University of Science and Technology in China describe how a unique combination of new hardware and software allows defects in solar panels to be clearly imaged and analyzed even in bright light.

“Today’s defect detection systems can only be used to find defects at night or on solar panel modules that have been removed and moved inside or into a shaded environment,” said Yunsheng Qian, who led the research team. “We hope that this system can be used to help inspectors at photovoltaic power stations locate defects and identify them more quickly, so that these systems can produce electricity at their maximum levels.”

Seeing through the light

In the new work, the researchers created an all-weather imaging system that works in any lighting conditions. To make defects visible, they developed software that applies a modulated electric current to a solar panel, which causes it to emit light that turns off and on very quickly.

An InGaAs detector with a very high frame rate is used to acquire a sequence of images of the solar panels as the electric current is applied. The researchers also added a filter that limits the wavelengths detected to those around 1150 nm to remove some of the stray sunlight from the images.

“The very fast imaging speed allows more images to be collected so that a greater number of changes between images can be distinguished,” said Sheng Wu, first author of the paper. “The key development was a new algorithm that distinguishes the modulated and unmodulated parts of the image sequence and then magnifies this difference. This allows the defects in the solar panel to be clearly imaged under high irradiance.”

The researchers are now working on software to help reduce digital noise to further improve image quality, so that the detector can collect image changes more accurately. They also want to see if artificial intelligence could be applied to the acquired images to automatically identify the types of defects and further streamline the inspection process. 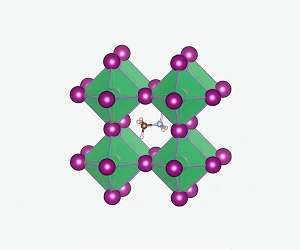 Scientists explore the physics of perovskite, a material with many potential technological applications


Perovskite is one of the most widely studied materials because of its many potential applications. A particularly promising field is photovoltaics, which involves devices that efficiently convert light into electricity. The conversion efficiency of hybrid perovskite is now around 25.2%, surpassing that of commercial silicon-based solar cells.

An example of hybrid perovskite is methylammonium lead iodide (CH3NH3PbI3). It is called hybrid because the iodine atom’s three negative ions (I-) are balanc … read more