Somewhere among the glitter of the night sky is a small satellite powered by innovative, next-generation solar cell technology developed at Sandia National Laboratories.
mPower Technology’s DragonSCALES, consist of small, highly interconnected photovoltaic cells formerly known as solar glitter at Sandia. They are orbiting Earth for the first time on a Lynk Global Inc. satellite that supports direct connection to unmodified mobile phones. The satellite was launched this summer.

The technology is being evaluated as a potential solar power solution for the Lynk Global constellation fleet. Data collected will provide valuable feedback to validate the product’s performance in space.

“It’s been amazing to watch this technology emerge from the labs and become a product sought after by satellite companies and federal agencies,” said Mary Monson, Sandia’s senior manager of technology partnerships and business development.

The solar cell technology was developed at the labs to reduce the cost of creating solar technology and increase its efficiencies. mPower Technology, a small, New Mexico company, licensed the technology from Sandia and commercialized it as DragonSCALES. The interconnected cells are made of highly efficient silicon that can be meshed into any shape, size or form.

mPower executives say benefits of the technology include ease of installation and system integration. Development costs are lower than other solar technologies because microcells require little material to form well-controlled and highly efficient devices.

“This was the first launch of our innovative DragonSCALES product with Lynk Global, and we look forward to a successful on-orbit demonstration for their constellation,” said Kevin Hell, mPower Technology president and CEO. “With the rapidly increasing interest in our technology for a wide range of new space power missions, we expect many more launches in the near future.”

Aiming for the stars and a future lunar landing

Future projects may take the technology as far as the moon.

mPower and spacecraft systems company Honeybee Robotics Inc. were recently selected by NASA as one of five commercial teams to develop designs for deployable solar array systems to be used on the surface of the moon and one day as charging stations to recharge rovers, battery packs and other electrical equipment used by spacecraft and astronauts.

The teams’ designs must be maneuverable, fold into a volume of less than half a cubic meter and, if selected by NASA, the developed station would be dropped off by lunar rovers to supply power. The team is focused on a Honeybee concept called Lunar Array Mast and Power System, LAMPS, that incorporates DragonSCALES. The design will use some of the most cost-effective, lightest, large area extendable solar panels ever made, according to mPower.

Murat Okandan, mPower chief technology officer, said, “Some of the most exciting and challenging systems coming up have characteristics that are very similar to LAMPS, where cost-effective, large-scale deployment of power systems is going to be critical in being able to meet the mission needs and support the envisioned expansion of activity in orbit and for landed systems.”

Sandia announced the development of solar glitter in 2009 after the solar cells were fabricated by researchers using technologies to fabricate microelectromechanical systems in Sandia’s Microsystems Engineering, Science and Applications facility, giving it the nickname MEPV for microsystem-enabled photovoltaics.

The original Sandia team continued to advance the technology through various projects sponsored by Sandia’s Laboratory Directed Research and Development program, the military and NASA. Today, some of the fabrication approaches pioneered by MEPV, such as oxide bonding, continue to be used for research involving semiconductors.

“DragonSCALES began as a Laboratory Directed Research and Development project in our lab over 12 years ago,” said Keith Ortiz, manager of the microelectromechanical systems technologies department. “Now, the technology is in space, and I’m looking forward to the next 12 years of development beyond Sandia.”

Okandan, one of the researchers who developed the technology, left Sandia through the Entrepreneurial Separation to Technology Transfer program and founded mPower. The program enables Sandia to transfer technology to the private sector by permitting employees to leave the labs to start up or expand tech companies. Entrepreneurs are guaranteed reinstatement for up to two years if they choose to return to Sandia.

In 2017, solar glitter was licensed to mPower. While the technology could be applied to a variety of devices of any shape, the company is focused on the space market and rapidly deployable, portable solar power systems.

“We couldn’t be prouder of the researchers who developed solar glitter and established a technology bound for space,” Monson said. “This is exactly the type of impact we are dedicated to at Sandia through our technology transfer programs. When technology leads to new companies, jobs and commercialization, it’s a win-win all around.”

Solar glitter and DragonSCALES have received recognition through awards and news stories. In 2012 when the technology was new, Sandia received a prestigious R and D100 Award.

Following successful efforts to transfer the technology to mPower, Sandia and the company have been recognized multiple times by the Federal Laboratory Consortium. Earlier this year, the partnership received a national Excellence in Technology Transfer Award from the consortium for transforming space power and other commercial markets. 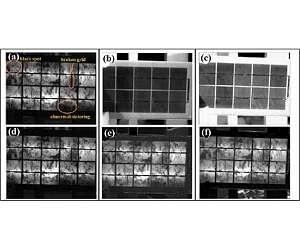 
Researchers have developed and demonstrated a new system that can detect defects in silicon solar panels in full and partial sunlight under any weather conditions. Because current defect detection methods cannot be used in daylight conditions, the new system could make it much easier to keep solar panels working optimally.

Silicon solar panels, which make up around 90 percent of the world’s solar panels, often have defects that occur during their manufacturing, handling or installation. These defe … read more