An international team of researchers led by Stanford University have developed rechargeable batteries that can store up to six times more charge than ones that are currently commercially available.

The advance, detailed in a new paper published Aug. 25 in the journal Nature, could accelerate the use of rechargeable batteries and puts battery researchers one step closer toward achieving two top stated goals of their field: creating a high-performance rechargeable battery that could enable cellphones to be charged only once a week instead of daily and electric vehicles that can travel six times farther without a recharge.

The new so-called alkali metal-chlorine batteries, developed by a team of researchers led by Stanford chemistry professor Hongjie Dai and doctoral candidate Guanzhou Zhu, relies on the back-and-forth chemical conversion of sodium chloride or lithium chloride to chlorine. They created a working prototype sodium metal-chlorine coin battery as a proof of concept.

When electrons travel from one side of a rechargeable battery to the other, recharging reverts the chemistry back to its original state to await another use. Non-rechargeable batteries have no such luck. Once drained, their chemistry cannot be restored.

“A rechargeable battery is a bit like a rocking chair. It tips in one direction, but then rocks back when you add electricity,” Dai explained. “What we have here is a high-rocking rocking chair.”

The reason no one had yet created a high-performance rechargeable sodium-chlorine or lithium-chlorine battery is that chlorine is too reactive and challenging to convert back to a chloride with high efficiency. In the few cases where others were able to achieve a certain degree of rechargeability, the battery performance proved poor.

In fact, Dai and Zhu did not set out to create a rechargeable sodium and lithium-chlorine battery at all, but merely to improve their existing battery technologies using thionyl chloride. This chemical is one of the main ingredients of lithium-thionyl chloride batteries, which are a popular type of single-use battery first invented in the 1970s.

But in one of their early experiments involving chlorine and sodium chloride, the Stanford researchers noticed that the conversion of one chemical to another had somehow stabilized, resulting in some rechargeability. “I didn’t think it was possible,” Dai said. “It took us about at least a year to really realize what was going on.”

Over the next several years, the team elucidated the reversible chemistries and sought ways to make it more efficient by experimenting with many different materials for the battery’s positive electrode. The big breakthrough came when they formed the electrode using an advanced porous carbon material from collaborators Professor Yuan-Yao Li and his student Hung-Chun Tai from the National Chung Cheng University of Taiwan. The carbon material has a nanosphere structure filled with many ultra-tiny pores. In practice, these hollow spheres act like a sponge, sopping up copious amounts of otherwise touchy chlorine molecules and storing them for later conversion to salt inside the micropores.

“The chlorine molecule is being trapped and protected in the tiny pores of the carbon nanospheres when the battery is charged,” Zhu explained. “Then, when the battery needs to be drained or discharged, we can discharge the battery and convert chlorine to make NaCl – table salt – and repeat this process over many cycles. We can cycle up to 200 times currently and there’s still room for improvement.”

The researchers envision their batteries one day being used in situations where frequent recharging is not practical or desirable, such as in satellites or remote sensors. Many otherwise usable satellites are now floating in orbit, obsolete due to their dead batteries. Future satellites equipped with long-lived rechargeable batteries could be fitted with solar chargers, extending their usefulness many times over.

For now though, the working prototype they’ve developed might still be suitable for use in small everyday electronics like hearing aids or remote controls. For consumer electronics or electrical vehicles, much more work remains to engineer the battery structure, increase the energy density, scale up the batteries and increase the number of cycles. 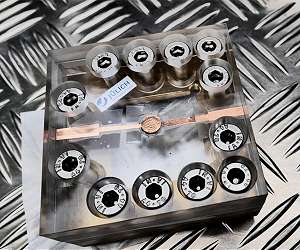 Solid-state batteries offer significant potential advantages over conventional lithium-ion batteries and could be transformational in meeting the UK’s net zero commitments through the electrification of transport.