The World Trade Organization (WTO) on Thursday ruled in favor of the United States in a dispute with China over tariffs on solar panels Washington imposed as part of the countries’ trade war.

Former US president Donald Trump approved steep tariffs on solar panel imports in January 2018 to protect US producers, triggering an outcry from China and South Korea, and even protests from the American solar industry.

Beijing requested the WTO set up a dispute panel to judge whether the tariffs violated international trade rules, and in its decision, the body said it “rejected all of China’s claims.”

US Trade Representative Katherine Tai, who was appointed by Trump’s successor Joe Biden, hailed the decision.

“I welcome the WTO panel’s findings rejecting China’s challenges to the US solar safeguard as baseless,” she said in a statement.

“We must make historic infrastructure investments that unlock the full potential of solar power and create good-paying jobs in cutting-edge fields that will help address the climate crisis.”

The duties were scheduled to end next February, and slide from 30 percent to 15 percent over four years.

Trump’s imposition of the tariffs was among the first moves in the trade war between the United States and China, which cooled with a truce signed in early 2020 between the two top global economies. 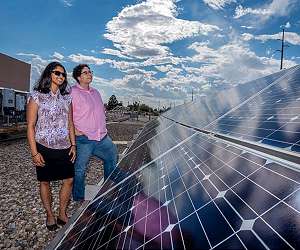