German chemicals giant BASF said Thursday it had agreed a partnership with Chinese firm Shanshan to produce components for batteries, including those used in electric cars, in China.

In a statement, BASF said it had agreed to take on a 51 percent share of the joint venture to produce cathode active materials and precursors on Chinese soil.

Shanshan, a supplier of lithium-ion battery materials in both the e-mobility and consumer electronics sectors, operates several production sites in China.

The deal comes as German companies have been pouring in resources to ramp up battery production for the switch to electric vehicles.

“By combining BASF’s and Shanshan’s expertise, we will accelerate the electrification transformation of the transportation industry,” said BASF director Markus Kamieth in a statement.

BASF said the agreement, which is still subject to approval by the authorities, would see it expand annual production capacity to 160 kilotonnes of materials by 2022.

The German group is already expanding its capacities in Europe, with a new factory set to open in 2022 in Brandenburg state, not far from Tesla’s electric vehicle “Gigafactory” just outside of Berlin.

The firm, whose chemicals are also used in pharmaceuticals, cleaning products, food and agriculture, employs more than 110,000 people globally.

It claims that joint venture with Shanshan will make it “the first company with capacities in all major markets by 2022”. 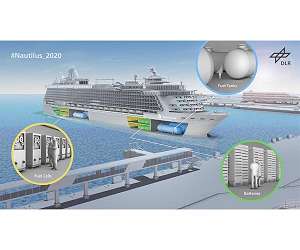 
Working with partners from industry and research, the German Aerospace Center is developing a climate-friendly energy supply system for ships. It is based on a highly efficient fuel cell system designed to generate heat and power on board. A notable benefit of the cells is that they work with many different fuels. To test the technology, the EU’s NAUTILUS (Nautical Integrated Hybrid Energy System for Long-haul Cruise Ships) research project, led by the DLR Institute of Engineering Thermodynamics, is pro … read more