If you have flown commercially in recent years, you may have noticed that certain items with large lithium-ion batteries can’t be checked. Instead, they must be in your carry-on and turned off.

Objects with these batteries, such as hoverboards or even cell phones, have been known to spontaneously combust, especially if they are physically damaged somehow. The resulting fire presents a danger to people in their vicinity.

So, if these batteries aren’t allowed on airplanes unsupervised, using them to propel the fully electric aircraft of the future may come with some challenges and questions about safety.

Exploring the feasibility of predicting and preventing battery fires before they happen is the idea behind a NASA research activity called SPARRCI, or “Sensor-based Prognostics to Avoid Runaway Reactions and Catastrophic Ignition.”

The big goal is to create a “smart” battery system that would self-monitor, learn about itself as it goes, and if needed say “hey, I’m developing a problem, shut me down” well before it endangers the safety of its aircraft.

One of the safety threats posed by batteries in electrically propelled aircraft is fire. These larger batteries, like those needed to power hoverboards and cars, have been known to catch fire because of an effect called “thermal runaway.”

Large batteries are basically many cells of small batteries packaged together. If one cell has a malfunction and starts to heat up in temperature, it causes the neighboring cell to do the same. Eventually, the whole battery overheats and could start a fire.

Battery sensors like the ones used by our phones and computers only measure the temperature outside the battery. SPARRCI is designing batteries with sensors inside them to identify the conditions that lead to thermal runaway, then alert the aircraft’s operator to the potential trouble.

The operator would then be able to correct the problem or replace the battery before the dangerous overheating ever occurs. This new, fine-tuned view of the inside of a battery could lead to safer and better performing energy storage – a new generation of batteries.

“With current batteries, we just try to contain fire so it doesn’t spread. But the best approach is to try and prevent the overheating and fire entirely. That’s what we’re trying to do with SPARRCI,” DeMattia said.

Another research area of SPARRCI is battery size and power storage.

Currently, large batteries providing that kind of power must be packaged in bulky containers to make sure that if something gets hot or catches fire, the heat is insulated, protecting other battery cells and the vehicle.

The size and weight of these containers could be reduced in the future with SPARRCI’s ability to show what’s going on inside the battery.

If the aircraft’s pilot or maintenance crew know that thermal runaway could occur, the battery can be replaced and never have a chance to catch fire.

If fire isn’t a threat anymore, extra insulation isn’t required, and the battery’s overall size and weight can be reduced. This would allow more space inside the vehicle to be dedicated to energy storage, improving its range and available power.

Since the activity began in 2020, SPARCCI researchers have successfully begun working out how to install sensors inside batteries. The next step? Identify what conditions the sensors inside the battery should look for to detect imminent battery problems or failures.

SPARRCI is part of the Convergent Aeronautics Solutions (CAS) project, which is designed to give NASA researchers the resources they need to determine if their ideas to solve some of aviation’s biggest technical challenges are feasible and perhaps worthy of additional pursuit within NASA or industry.

One of the things that makes CAS activities like SPARRCI unique is the requirement for researchers from different technical disciplines and NASA field centers to collaborate and bring their unique expertise to bear on the problem.

For SPARRCI, that collaboration led to some memorable moments for battery and sensor researchers at NASA’s Langley Research Center in Virginia, who have been working with their counterparts at NASA Glenn.

The Langley researchers evaluated batteries from Glenn using a Scanning Electron Microscope (SEM), a device similar to the ultrasound machines used in doctors’ offices and hospitals.

“Our goal was to collect images of the guts of the battery during a test without having to open them up post-mortem. This allowed us to see conditions changing in real time and run non-destructive scans to get a sense of the ‘topography’ of the internal surfaces as they morphed during operation,” DeMattia said.

What they saw during the scans was, well, out of this world.

“As we used the SEM to scan images of these lithium metal surfaces inside the battery they sometimes looked like the surface of the Moon! It was one of the coolest things. We spent hours around the computer, ‘oohs’ and ‘ahs’ often thrown around, with an occasional ‘What on Earth is that?’ thrown in for good measure.”

“It’s not something that any of us have done or seen before, but the images did help us tie together the data we collected,” DeMattia said. “We couldn’t have done this without the different disciplines coming together. It has been really exciting.”

SPARRCI was selected to be a two-year activity that began on Oct. 1, 2019. Interruptions in the pursuit prompted by the COVID-19 pandemic might lead to an extension, although nothing has been decided yet.

Once completed, information gathered, and experience gained during SPARRCI will be shared with others within NASA and the broader aviation community. 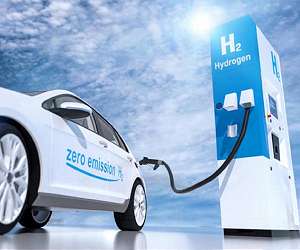 
A considerable portion of the efforts to realize a sustainable world has gone into developing hydrogen fuel cells so that a hydrogen economy can be achieved. Fuel cells have distinctive advantages: high energy-conversion efficiencies (up to 70%) and a clean by-product, water.

In the past decade, anion exchange membrane fuel cells (AEMFC), which convert chemical energy to electrical energy via the transport of negatively charged ions (anions) through a membrane, have received attention due to their … read more