Designing a recycling strategy for a new, forthcoming generation of photovoltaic solar cells – made from metal halide perovskites, a family of crystalline materials with structures like the natural mineral calcium titanate – will add a stronger dose of environmental friendliness to a green industry, according to Cornell University-led research published June 24 in Nature Sustainability.

The paper shows substantial benefits to recycling perovskite solar panels, though they are still in the commercial development stage, said Fengqi You, the Roxanne E. and Michael J. Zak Professor in Energy Systems Engineering in the College of Engineering.

“When perovskite solar panels reach the end of their useful life, how do we deal with this kind of electronic waste?” said You, also a faculty fellow at the Cornell Atkinson Center for Sustainability. “It is a new class of materials. By properly recycling it, we could potentially reduce its already low carbon footprint.

“As scientists design solar cells, they look at performance,” You said. “They seek to know energy conversion efficiency and stability, and often neglect designing for recycling.”

Last year, You and his laboratory found that photovoltaic wafers in solar panels containing all-perovskite structures outperform photovoltaic cells made from state-of-the-art crystalline silicon, and the perovskite-silicon tandem – with cells stacked like pancakes to better absorb light – perform exceptionally well.

Recycling them enhances their sustainability, as the recycled perovskite solar cells could bring 72.6% lower primary energy consumption and a 71.2% reduction in carbon footprint, according to the paper, “Life Cycle Assessment of Recycling Strategies for Perovskite Photovoltaic Modules,” co-authored by Xueyu Tian, a doctoral student at Cornell Systems Engineering, and Samuel D. Stranks of the University of Cambridge.

The best recycled perovskite cell architecture could see an energy payback time of about one month, with a carbon footprint as low as 13.4 grams of carbon dioxide equivalent output per kilowatt hour of electricity produced. Without recycling, the energy payback time and carbon footprint of new perovskite solar cells show a range of 70 days to 13 months, and 27.5 to 158.0 grams of carbon dioxide equivalent throughout their life cycles.

Today’s market-leading silicon photovoltaic cells can expect an energy payback period of 1.3 to 2.4 years, with an initial carbon footprint between 22.1 and 38.1 grams of carbon dioxide equivalent emissions per kilowatt hour output.

Said You: “The real value of an effective green perovskite solar panel industry may rely on a recycling program.” 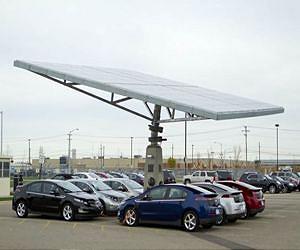