Japan aims to hike its 2030 renewable energy target as part of efforts to slash emissions, according to draft documents released Wednesday, but activists described the planned goal as “disappointing”.

The blueprint of the nation’s energy policy sets a higher target of 36-38 percent of power supplies coming from renewable sources such as solar and wind by fiscal 2030 — up from the current goal of 22-24 percent.

Major firms including Sony, Panasonic and Nissan had in January called for the government to make the target twice as ambitious at 40-50 percent.

The world’s third-largest economy is still heavily reliant on fossil fuels, in part because many nuclear reactors remain offline after the Fukushima meltdown a decade ago.

The documents released Wednesday by Japan’s ministry of economy, trade and industry said the new target would make renewables the majority of the country’s energy mix.

Greenpeace described the draft as “disappointing” and criticised Japan for “failing to commit to ending fossil fuel” despite setting a 2050 deadline for carbon-neutrality last year.

“The revision of the Basic Energy Plan is a pivotal point to demonstrate Japan’s political will to achieve net-zero by 2050,” Hisayo Takada, programme director at Greenpeace Japan, said in a statement.

“However, the draft plan is disappointing as it is not anywhere near sufficient to meet the 1.5 degrees Celsius target,” Takada added, referring to the goal for global warming in the 2015 Paris agreement.

The draft policy left the ratio of nuclear energy unchanged at 20-22 percent.

Thermal power supplies should account for 56 percent, down from the present target of 41 percent, it said.

The government aims to hold further discussions and finalise the policy in October, according to public broadcaster NHK. 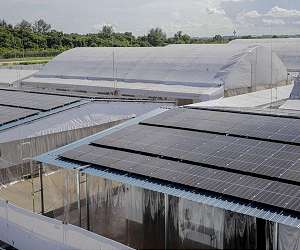