A research team in Korea has developed a ceramic fuel cell that offers both stability and high performance while reducing the required amount of catalyst by a factor of 20. The application range for ceramic fuel cells, which have so far only been used for large-scale power generation due to the difficulties associated with frequent start-ups, can be expected to expand to new fields, such as electric vehicles, robots, and drones.

The Korea Institute of Science and Technology (KIST) announced that a team led by Dr. Ji-Won Son at the Center for Energy Materials Research, through joint research with Professor Seung Min Han at the Korea Advanced Institute of Science and Technology (KAIST), has developed a new technology that suppresses the deterioration brought on by the reduction-oxidation cycle, a major cause of ceramic fuel cell degradation, by significantly reducing the quantity and size of the nickel catalyst in the anode using a thin-film technology.

Ceramic fuel cells, representative of high-temperature fuel cells, generally operate at high temperatures – 800 C or higher. Therefore, inexpensive catalysts, such as nickel, can be used in these cells, as opposed to low-temperature polymer electrolyte fuel cells, which use expensive platinum catalysts.

Nickel usually comprises approximately 40% of the anode volume of a ceramic fuel cell. However, since nickel agglomerates at high temperatures, when the ceramic fuel cell is exposed to the oxidation and reduction processes which accompany stop-restart cycles, uncontrollable expansion occurs.

This results in the destruction of the entire ceramic fuel cell structure. This fatal drawback has prevented the generation of power by ceramic fuel cells from applications which require frequent start-ups.

In an effort to overcome this, Dr. Ji-Won Son’s team at KIST developed a new concept for an anode which contains significantly less nickel, just 1/20 of a conventional ceramic fuel cell. This reduced amount of nickel enables the nickel particles in the anode to remain isolated from one another.

To compensate for the reduced amount of the nickel catalyst, the nickel’s surface area is drastically increased through the realization of an anode structure where nickel nanoparticles are evenly distributed throughout the ceramic matrix using a thin-film deposition process.

Moreover, the power output of the novel anode ceramic fuel cells was improved by 1.5 times compared to conventional cells, despite the substantial reduction of the nickel content.

Dr. Ji-Won Son explained the significance of the study, stating, “Our research into the novel anode fuel cell was systematically conducted at every stage, from design to realization and evaluation, based on our understanding of reduction-oxidation failure, which is one of the primary causes of the destruction of ceramic fuel cells.” Dr. Son also commented, “The potential to apply these ceramic fuel cells to fields other than power plants, such as for mobility, is tremendous.” 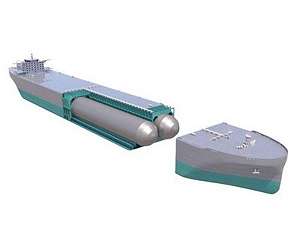 
Ballard Power Systems has signed a non-binding Memorandum of Understanding (MOU) with Global Energy Ventures – a provider of integrated compressed shipping solutions for the transportation of energy to regional markets, headquartered in Australia – for the development of a new fuel cell-powered ship, called C-H2 Ship, designed to transport compressed green hydrogen.

The power required for a small-scale demonstration of the C-H2 Ship is expected to be under 10 megawatts (MW). At full scale, the C-H … read more