In the future, photovoltaic cells could be “worn” over clothes, placed on cars or even on beach umbrellas. These are just some of the possible developments from a study published in Nature Communications by researchers at the Physics Department of the Politecnico di Milano, working with colleagues at the University of Erlangen-Nuremberg and Imperial College London.

The research includes among its authors the Institute of Photonics and Nanotechnology (IFN-CNR) researcher Franco V. A. Camargo and Professor Giulio Cerullo. It focused on photovoltaic cells made using flexible organic technology. Today’s most popular photovoltaic cells, based on silicone technology, are rigid and require a sophisticated and expensive infrastructure to manufacture them and have high disposal costs.

An alternative to replace silicon in the future is “plastic” solar cells, in which a mixture of two organic semiconductors, one electron donor and an electron acceptor, absorbs light energy and converts it into electrical energy. Using organic molecules brings several advantages, such as simpler technology, reduced production and disposal costs, mechanical flexibility, and access to organic materials’ chemical diversity.

However, organic materials have more complex physics than crystalline inorganic materials (such as silicone), particularly for charge transfer processes at donor-acceptor interfaces, which cause efficiency losses.

After four years of work, the researchers succeeded in creating solar cells with new materials in which losses due to interface states are minimised. By studying these materials with ultra-short laser pulses, they identified the physical reasons behind this exceptional performance, presenting a general optimisation model valid for other material combinations.

Future photovoltaic cells made from organic technology will be a cheaper source of energy with less environmental impact. They can be incorporated into various everyday objects such as windows, cars, or even clothes and coats because of their mechanical flexibility.

The study falls within the scope of renewable energy, as one of the critical challenges for humanity’s future is the development of clean and renewable sources of energy. The Earth’s primary energy source is sunlight, which provides more than 100 times more energy daily than humanity needs, making photovoltaic technologies among the most promising for the future. With its climate and few clouds, Italy has one of the most considerable photovoltaic potentials in Europe, comparable to that of non-desert tropical countries. 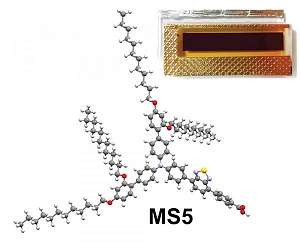