“With the installation of this new solar panel system, Northrop Grumman is supporting the state of Illinois as it expands its renewable energy use and is taking another meaningful step to reduce our greenhouse gas emissions,” said Sandra Evers-Manly, vice president, global corporate responsibility, Northrop Grumman.

“This initiative underscores our long-term commitment to addressing climate change and promoting environmental sustainability in our operations.”

The 1.1-megawatt AC solar power-generating system is expected to reduce an estimated 870 metric tons of carbon dioxide emissions each year, which is equivalent to powering nearly 100 homes for a year.

The system is owned and operated by a subsidiary of NextEra Energy Resources, LLC. This qualifies as part of the Illinois Shines initiative, a state incentive program supporting new solar energy projects in Illinois.

The renewable energy certificates (RECs) generated by this solar power system will be sold to help the state of Illinois meet its renewable energy goals. Northrop Grumman will purchase replacement RECs from other renewable energy projects to match the system’s electricity output and environmental impact claims. 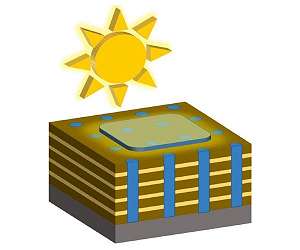 
A new method for constructing special solar cells could significantly increase their efficiency. Not only are the cells made up of thin layers, they also consist of specifically arranged nanoblocks. This has been shown in a new study by an international research team led by the Martin Luther University Halle-Wittenberg (MLU), which was published in the scientific journal Nano Letters.

Commercially available solar cells are mostly made of silicon. “Based on the properties of silicon it’s not feasib … read more