The photochemistry of the future will spring up human industry without smoke, and bring a brighter civilization based on the utilization of solar energy instead of fossil energy. Photochemistry has been used in controlling many reaction processes, especially for the challenging reactions containing selective C-H activation and C-C coupling in chemical synthesis.

It is of great interests that a “dream catalytic reaction” of direct coupling of methanol to ethylene glycol (2CH3OH – HOCH2CH2OH + H2, denoted as MTEG) could be achieved through the solar energy-driven C-H activation and C-C coupling processes, and this MTEG reaction has not been achieved through thermocatalysis yet.

Ethylene glycol (EG) is an important monomer for the manufacture of polymers (e.g., poly(ethylene terephthalate), PET), and can also be used as antifreeze and fuel additive. The annual production of EG is more than 25 million tons, which is primarily produced from petroleum-derived ethylene industrially.

Methanol is a clean platform chemical, which can not only traditionally produced from natural gas and coal, but also has been directly synthesized from biomass and CO2. Thus, the solar energy-driven MTEG route provides an alternative process for sustainable synthesis of EG and H2 from methanol directly with great attractions.

Compared with other metal oxide photocatalysts, such as TiO2, ZnO, WO3, Nb2O5, tantalum oxide (Ta2O5) is unique in that it can realize the selective photocatalytic coupling of methanol to EG. The co-catalyst free nitrogen doped tantalum oxide (2%N-Ta2O5) shows an EG formation rate as high as 4.0 mmol/g/h, about 9 times higher than that of Ta2O5, with a selectivity higher than 70%. The high charge separation ability of nitrogen doped tantalum oxide plays a key role in its high activity for EG production.

This catalyst also shows excellent stability longer than 160 h, which has not been achieved over the reported metal sulfide photocatalysts. Tantalum-based photocatalyst is an environmentally friendly and highly stable candidate for photocatalytic coupling of methanol to EG. The results were published in Chinese Journal of Catalysis. 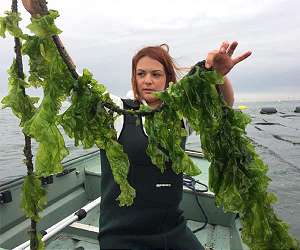 
From making algae-sequin dresses, dyeing clothes with bacteria to planting trackable pigments in cotton, an emerging tide of technological innovations offers the fashion industry a chance to clean up its woeful environmental record.

Change is urgently needed, since the industry consumes 93 billion cubic metres of water per year, dumps 500,000 tonnes of plastic microfibres into the ocean, and accounts for 10 percent of global carbon emissions, according to the Ellen MacArthur Foundation.