Among the materials known as perovskites, one of the most exciting is a material that can convert sunlight to electricity as efficiently as today’s commercial silicon solar cells and has the potential for being much cheaper and easier to manufacture.

There’s just one problem: Of the four possible atomic configurations, or phases, this material can take, three are efficient but unstable at room temperature and in ordinary environments, and they quickly revert to the fourth phase, which is completely useless for solar applications.

Now scientists at Stanford University and the Department of Energy’s SLAC National Accelerator Laboratory have found a novel solution: Simply place the useless version of the material in a diamond anvil cell and squeeze it at high temperature. This treatment nudges its atomic structure into an efficient configuration and keeps it that way, even at room temperature and in relatively moist air.

“This is the first study to use pressure to control this stability, and it really opens up a lot of possibilities,” said Yu Lin, a SLAC staff scientist and investigator with the Stanford Institute for Materials and Energy Sciences (SIMES).

“Now that we’ve found this optimal way to prepare the material,” she said, “there’s potential for scaling it up for industrial production, and for using this same approach to manipulate other perovskite phases.”

A search for stability

Perovskites get their name from a natural mineral with the same atomic structure. In this case the scientists studied a lead halide perovskite that’s a combination of iodine, lead and cesium.

One phase of this material, known as the yellow phase, does not have a true perovskite structure and can’t be used in solar cells. However, scientists discovered a while back that if you process it in certain ways, it changes to a black perovskite phase that’s extremely efficient at converting sunlight to electricity. “This has made it highly sought after and the focus of a lot of research,” said Stanford Professor and study co-author Wendy Mao.

Unfortunately, these black phases are also structurally unstable and tend to quickly slump back into the useless configuration. Plus, they only operate with high efficiency at high temperatures, Mao said, and researchers will have to overcome both of those problems before they can be used in practical devices.

There had been previous attempts to stabilize the black phases with chemistry, strain or temperature, but only in a moisture-free environment that doesn’t reflect the real-world conditions that solar cells operate in. This study combined both pressure and temperature in a more realistic working environment.

Pressure and heat do the trick

Working with colleagues in the Stanford research groups of Mao and Professor Hemamala Karunadasa, Lin and postdoctoral researcher Feng Ke designed a setup where yellow phase crystals were squeezed between the tips of diamonds in what’s known as a diamond anvil cell. With the pressure still on, the crystals were heated to 450 degrees Celsius and then cooled down.

Under the right combination of pressure and temperature, the crystals turned from yellow to black and stayed in the black phase after the pressure was released, the scientists said. They were resistant to deterioration from moist air and remained stable and efficient at room temperature for 10 to 30 days or more.

Examination with X-rays and other techniques confirmed the shift in the material’s crystal structure, and calculations by SIMES theorists Chunjing Jia and Thomas Devereaux provided insight into how the pressure changed the structure and preserved the black phase.

The pressure needed to turn the crystals black and keep them that way was roughly 1,000 to 6,000 times atmospheric pressure, Lin said – about a tenth of the pressures routinely used in the synthetic diamond industry. So one of the goals for further research will be to transfer what the researchers have learned from their diamond anvil cell experiments to industry and scale up the process to bring it within the realm of manufacturing.

The researchers described their results in Nature Communications. 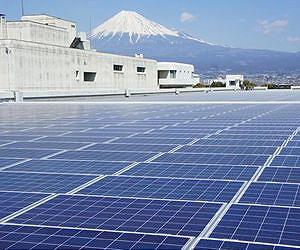 
Major firms including Sony, Panasonic and Nissan on Monday urged the Japanese government to make its 2030 renewable energy target twice as ambitious.

Japan currently aims to source between 22 and 24 percent of its power from solar, wind and other renewables by 2030, a target set three years ago and soon to be reassesse … read more