With the help of X-ray tomography, scientists have for the first time observed the evolution of materials inside solid state batteries during the charging and discharging processes.

For their study, researchers used a complicated imaging technology called operando synchrotron X-ray computed microtomography to observe changes in a battery’s electrode material at the interface between lithium and solid-state electrolytes.

The unprecedented images showed the charge-discharge process causes voids to form at the interface, causing loss of contact between the lithium and solid-state electrolytes and triggering cell failure.

“This work provides fundamental understanding of what is happening inside the battery, and that information should be important for guiding engineering efforts that will push these batteries closer to commercial reality in the next several years,” study lead author Matthew McDowell said in a news release.

“We were able to understand exactly how and where voids form at the interface, and then relate that to battery performance,” said McDowell, an assistant professor of mechanical engineering at the Georgia Institute of Technology.

The lithium-ion batteries that power everything from smart phones to electric cars use liquid electrolytes to transport ions between between electrodes. Solid-state batteries use a solid electrolyte.

But to make solid-state batteries efficient enough to replace lithium-ion batteries, research must find ways to improve their reliability and eliminate the growth of interface voids.

Solid-state batteries can offer more power potential than a similarly-sized lithium-ion battery, but they can’t last as long. The emergence of cavities that commonly separate lithium from electrodes in solid-state batteries limit their longevity and commercial viability.

“To counter this, you could imagine creating structured interfaces through different deposition processes to try to maintain contact through the cycling process,” McDowell said.

“Careful control and engineering of these interface structures will be very important for future solid-state battery development, and what we learned here could help us design interfaces,” McDowell said.

For their study, engineers at Georgia Tech build a pair of solid-state test cells to monitor using the imaging technology at the Advanced Photon Source, a synchrotron facility at Argonne National Laboratory located outside of Chicago.

Over the course of a week, scientists used the facility’s synchrotron X-ray computed microtomography imaging technology to watch the evolution of the cell’s electrode materials as it charged and discharged.

“The instrument takes images from different directions, and you reconstruct them using computer algorithms to provide 3D images of the batteries over time,” McDowell said. “We did this imaging while we were charging and discharging the batteries to visualize how things were changing inside the batteries as they operated.”

“We are very excited about the technological prospects for solid-state batteries,” McDowell said. “There is substantial commercial and scientific interest in this area, and information from this study should help advance this technology toward broad commercial applications.” 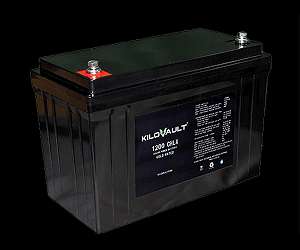 
KiloVault, a provider of innovative and affordable residential and commercial renewable energy solutions, this week unveiled the new 1200 HLX and 1200 CHLX heavy-duty deep-cycle lithium batteries. These 1,200 Watt-hour-capacity batteries complement KiloVault’s existing 1,800 Wh and 3,600 Wh models, and handle 80A of continuous charging current and 100A of continuous discharging current.