Space-based solar power could provide round-the-clock access to renewable energy, sidestepping one of the technology’s biggest limitations. Now the idea will get its first real test after a Falcon 9 rocket successfully launched experimental hardware designed to assess its feasibility.

The idea of ​​setting up giant solar panels in orbit around the Earth and radiating the power has been around for decades. The possibility is attractive because in space you are no longer at the mercy of the weather or the planet’s cycles of day and night, and solar radiation levels are higher because sunlight does not have to pass through the atmosphere.

Until now, however, space-based solar energy has remained in the realm of science fiction due to the technical complexity and unforgiving economics of space technologies. But thanks to a $100 million gift in 2013, a multidisciplinary team at Caltech has been quietly working on it for the past decade, developing the various technologies needed to make it a reality. And this past Tuesday, prototypes of some of the key subsystems needed for a full-scale space solar power plant were delivered into orbit by SpaceX for testing.

Over the next few months, the team behind the Caltech Space Solar Power Project will test the systems that will allow their flexible solar panels to be deployed in space and the technology designed to transmit power back to Earth. They will also assess how well different types of solar panel technologies hold up in the harsh environment of space.

“No matter what happens, this prototype is an important step forward,” Ali Hajimiri, one of the three Caltech professors leading the project, said in a statement. “It works here on Earth, and has gone through the rigorous steps required of anything launched into space. There are still many risks, but going through the whole process has taught us valuable lessons.”

Building solar panels in space is a much more complicated business than doing so on Earth. The biggest challenge is getting them there in the first place, which is limited by the incredible cost of launching material into orbit. As a result, the team had to focus on reducing the weight of their solar panels as much as possible without sacrificing their generation capacity.

Their solution combines ultra-thin flexible solar panels, an ingenious design that integrates power generation and transmission, and a new modular architecture that allows many smaller, stand-alone panels to be combined to create large arrays.

The basic unit of their design is a rectangular tile a few inches across whose surface is covered with mirror-like solar concentrators that direct sunlight to a strip of photovoltaic cells, where it is converted into electricity. Below the surface is an integrated circuit that transforms the power of the solar cells into microwaves, which are then emitted from the bottom of the tile by a set of ultra-thin and flexible patch antennas.

This design generates significant weight savings, because it eliminates the need for bulky wiring to transport the generated electricity to a central transmitter. Those tiles will then be arranged into strips and integrated into a new folding structure that will be compact at launch and then unfold once in space.

The result will be a self-contained spacecraft that can deploy itself, generate power, and transmit it back to Earth, but the vision involves combining many of these to create arrays capable of producing comparable amounts of energy to a ground-based system. . That arrangement makes it easy to adjust the size and configuration of arrays, and also means that damage to individual modules won’t shut down the entire system.

The experiments launched this week are designed to test several of the key underlying technologies behind this architecture. One called DOLCE (Deployable on-Orbit ultraLight Composite Experiment) will test the developing mechanism by deploying a six-by-six-foot frame of a small dumpster-sized dog kennel.

Another called MAPLE (Microwave Array for Power-transfer Low-orbit Experiment) will test an array of ultra-lightweight microwave transmitters designed to beam power over distance in space. A final experiment called ALBA will test 32 different types of photovoltaic cells over several months to see which works most effectively in the punishing environment of space.

Assuming all tests go according to plan, the researchers will validate some of the key technologies needed to make their vision a reality. But considering the declining price of solar energy on Earth and the increasing prevalence of energy storage technologies designed to deal with the intermittency of solar energy, there are question marks about the economics and practicality of the idea.

The technology could play an important role in the longer term, however, John Timmer writes in Ars Technica. Most estimates suggest that we could switch about 70 percent of our grid to renewable energy fairly easily, but the lack of reliability due to seasonal changes or rare weather events means that going higher could be difficult.

A source of renewable energy available 24 hours a day, 7 days a week could help plug the gap when conditions on Earth lead to a drop in generation. We’re probably still decades away from needing that, but given how complex space-based solar power is, getting to work on the technology now seems like a smart bet.

What are the 3 types of solar power systems?

What are the 3 types of residential solar electric power systems?

The three types of solar energy systems are grid-tied, off-grid and hybrid. See the article : Why is solar energy not widely used ?. Each system offers unique power generation and power storage.

What are the 3 main configurations of PV systems? There are three main types of solar PV and storage systems: grid-tied, grid/hybrid and off-grid.

What are the types of residential solar panels? According to Energy Sage, an online resource approved by the US Department of Energy that allows consumers to comparison shop for solar energy, there are three main types of solar panels available for residential use. They are: single crystal, polycrystalline and thin film.

How expensive is space-based solar power?

Instead of costing about $1,000 to launch each kilogram into space, Mankins now expects the price to drop to $300 per kilogram. “That’s the holy grail for space solar.

Can we generate electricity from space? Space-based solar energy basically consists of three elements: collecting solar energy in space with reflectors or inflatable mirrors on solar cells or heaters for thermal systems. wireless power transmission to Earth by microwave or laser. receiving power on Earth with a rectenna, microwave antenna.

Is a solar powered rocket possible? Solar thermal rockets have been proposed as a system for launching small personal spacecraft into orbit. The design is based on a high-altitude airship that uses its envelope to focus sunlight onto a tube. The propellant, which would probably be ammonia, is then passed through to produce thrust. 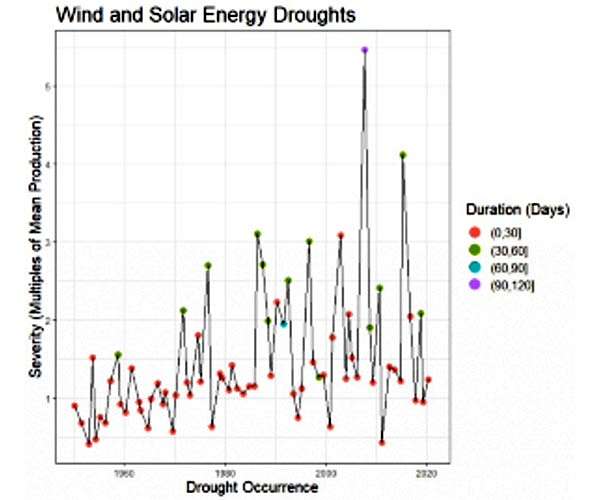 On the same subject :
You’ve heard of water droughts
Renewable energy prices have fallen by more than 70 percent in…

High initial costs for material and installation and a long ROI (however, with the reduction in the cost of solar over the last 10 years, solar is becoming more cost feasible every day) Needs a lot of space because efficiency is still not 100%.

Solar energy systems can generate electricity in any climate. One of the disadvantages of solar energy is that it is subject to temporary weather disruption. Cloudy days reduce the amount of electricity you produce.

What are the 5 main advantages of solar energy? Provides clean, renewable energy Home solar is a clean, zero-emission and renewable energy source. Unlike fossil fuels like coal and natural gas, home solar does not release harmful pollutants or greenhouse gases—like carbon dioxide—into the air and water supply.

What is the major disadvantage of solar energy Mcq?

The main disadvantage of solar panels is that at night it does not work and the cost of installation is very high. The main advantages of solar energy are reliability, predictability, uninterruptible, low maintenance, no cost, no pollution, and performance is good.

What are the 2 disadvantages of solar energy? High initial costs for material and installation and a long ROI (however, with the reduction in the cost of solar over the last 10 years, solar is becoming more cost feasible every day) Needs a lot of space because efficiency is still not 100%. No solar power at night so a large battery bank is required.

To see also :
How is solar energy generated into electricity ?
Solar panels do not increase an individual’s risk of getting a headache.…

What are the benefits of space technology?

The space technology has shown such benefits in many fields including the areas of health and education, communication sectors, land and water resource management, weather forecasting and disaster management.

What are advantages of space technology? Being able to make calls from a cell phone, locate yourself using an online map, the vegetables you eat and even the filtered water you drink are just some of the areas of our daily lives that benefit from space technology.

What are the uses of space technology? Many common everyday services for terrestrial use such as weather forecasting, remote sensing, satellite navigation systems, satellite television, and some long-distance communication systems critically rely on space infrastructure. Of the sciences, astronomy and Earth science benefit from space technology.